The IRS has blessed two legal structures that allow multiple, unrelated 1031 investors to invest in the same replacement property. They are Tenants-in-Common (TIC) ownership and Delaware Statutory Trusts (DST). Though both structures permit groups of investors to pool their equity to acquire replacement properties on a tax-deferred basis, the similarities largely stop there.

Before the early 2000s, 1031 investors were advised by their tax advisors to avoid using a partial ownership interest in real estate as a replacement property for a 1031 exchange. In spite of this, aggressive investors did not heed that advice, and found it a little bit difficult to defend that decision when audited by the IRS.

All this changed in 2002, however, when the IRS issued Rev. Proc. 2002-22, which effectively approved the use of the TIC structure. Similarly, the IRS issued Rev. Proc 2004-86 in 2004, approving the DST for 1031 exchanges. Since then, tens of thousands of investors have exchanged more than $20 billion into and out of TIC and DST replacement property interests.

A Closer Look at a TIC

Under the TIC real estate definition, investors are considered co-owners and hold a direct ownership position in the property, which qualifies as a like-kind exchange. Each TIC investor is deemed to be a borrower on the mortgage of a property owned by a TIC, and they each hold title in the form of a deed on the property. TIC investors must have voting rights on major decisions concerning the property, but day-to-day management is left to the sponsor that put the TIC together.

Despite the benefits of the TIC structure, its popularity declined rapidly following DST approval for 1031 exchanges. Here’s why:

Lenders were reluctant to provide financing on properties owned by TIC entities. From the lender’s viewpoint, having up to 35 borrowers for a single property is an administrative nightmare. Because each TIC investor is a borrower on the mortgage, each one requires underwriting and monitoring.

The TIC structure can result in conflicts among investors. Major decisions regarding the property owned by the TIC, most notably selling the property and raising additional capital, require unanimous consent among all the co-owners. Numerous situations have surfaced where a handful of investors or a single investor (in many cases with a minute share of the TIC) negated the wishes of all the other co-investors.

The IRS limits the maximum number of investors to 35. This regulation puts a constraint on the size of property that can be purchased—and increases the minimum investment an investor must make to be included in the TIC.

There's one more administrative hurdle for investors: each TIC investor must set up a single member LLC to protect their personal assets in the event the TIC files for bankruptcy.

A Closer Look at the Differences

In the DST structure investors buy an ownership interest in a trust that holds title to the property. This is a contrast to the TIC, where each investor holds title directly. Unlike a TIC, the DST (not the individual investors) is the borrower, which is preferable for both lenders and investors. A single borrower obtaining a loan on a property is more efficient and considerably less expensive than when multiple borrowers attempt to do so.

Under the IRS's 2004 revenue ruling, investors in a DST are required to be entirely passive. As a result, DST investors are kept from having any say in the major decisions regarding the property—most notably when it's sold. Instead, decision-making authority rests with the signatory trustee, which is typically the DST sponsor.

The IRS’s intent here was to make a DST a passive holder of real estate. As a result, the trustee for the DST is precluded from making most operational decisions regarding the property. As an example, the trustee can not enter into a new lease on the property. Because this is not feasible for most types of real estate, most of the properties owned by a DST are operated under a master lease under a master lease by an affiliate of the DST sponsor.

Despite these structural improvements, the DST still has some significant disadvantages. Most notably, the IRS prohibits the DST from raising additional capital after it has purchased the underlying property. As a result, if a property needs additional capital for operations or upkeep, it must draw from reserves held within the DST.

With nearly 60 years of collective experience and $5.0 billion of real estate transactions behind us, the Realized team has the expertise and the tools to help you weigh the risks and evaluate your choices. Call us at (877) 797-1031 to find out more about how we can assist you with your 1031 exchange today.

Are TIC Investments Right For Me? 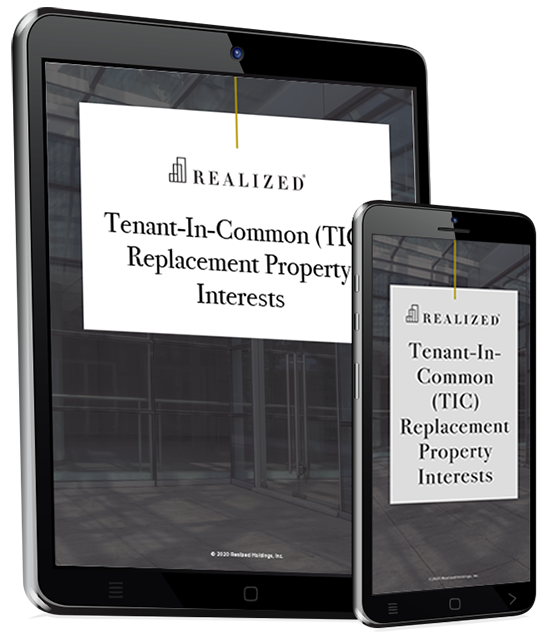 Are TIC Investments Right For Me?