What Is the Maryland Statutory Trust Act?

The Maryland Statutory Trust Act has its origins in the 1999 Maryland Business Trust Act.¹

The Maryland General Assembly revised the original business trust act in early 2010, and those provisions were signed into law in June of that year. The Maryland Act was further amended in 2014, and those changes went into law the following year.

The two amendments to the original business trust act clarified key provisions of Maryland trust law that were not addressed or defined in the original act. Below we’ll take a look at how those important revisions affect statutory trusts formed in the State of Maryland.

Forming a Statutory Trust in Maryland

Neighboring Delaware enjoys its reputation as the most advantageous place to form a business or statutory trust. Ninety-three percent of U.S.-based companies that had initial public offerings in 2021 were incorporated in Delaware, and there were 2,306 statutory trusts filed in The First State last year as well – a 30-percent increase from two years earlier.²

The State of Maryland is closing the gap, though, due to its work on enhancing and simplifying its trust laws. According to the National Association of Real Estate Investment Trusts, Maryland has become the nation’s favored place to form real estate investment trusts, with three-quarters of all publicly traded REITS having formed in Maryland.³

Maryland trusts are formed by filing certificates of trust with the Department of Assessments and Taxation of Maryland. They are separate legal entities governed by the Maryland Statutory Trust Act. This act lists many of the general trustee powers, which are in line with the powers afforded to corporations under the Maryland General Corporation Law. This provision simplifies the formation of statutory trusts since those powers don’t need to be defined in the certificate of trust.

Provisions of the Maryland Trust Act

The Maryland Act contains several important provisions that weren’t part of the original business trust act of 1999. Though they were modeled after the Delaware Statutory Trust Act, these provisions were designed to be even more advantageous to statutory trusts formed in the State of Maryland than in neighboring Delaware. Among them:

This article doesn’t define the full scope of the Maryland Act. For further clarification, consult with a legal professional who has experience working with Maryland trust law.

3. Why Maryland is the Favored Jurisdiction for Forming REITs, Corporation Service Company, https://www.cscglobal.com/service/webinar/maryland-reit-dominance/

This material is for general information and educational purposes only. Information is based on data gathered from what we believe are reliable sources. It is not guaranteed as to accuracy, does not purport to be complete and is not intended to be used as a primary basis for investment decisions. It should also not be construed as advice meeting the particular investment needs of any investor. Realized does not provide tax or legal advice. This material is not a substitute for seeking the advice of a qualified professional for your individual situation.

The Investor's Guidebook To DSTs 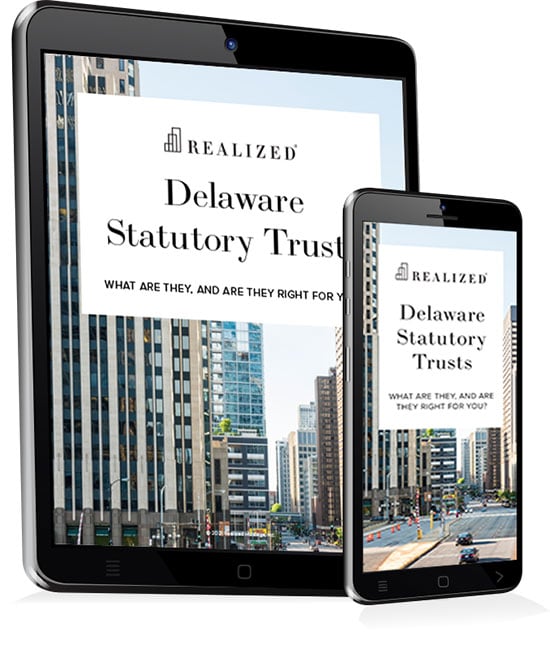 See if Delaware Statutory Trusts are right for you.