The TCJA proposal calls for Section IRC 1031 to apply to only “real property” (i.e., investment properties).  As the IRS Code reads now, investors can do 1031 exchanges on virtually any type of property (without the word “real”), which includes rental car fleets, heavy machinery, airplanes and even works of art. In essence, this change means that investors would no longer be able to do like-kind exchanges of personal property.

Beyond 1031 exchanges, the other provisions of the TCJA bodes well for commercial real estate investors.

The Senate is expected to release their tax-reform bill this week, which most political pundits agree will closely mirror the House version.  House Speaker Paul Ryan (R-KY) and Senate Majority Leader Mitch McConnell (R-KY) are pushing to pass tax-reform legislation by Thanksgiving and have a bill on the President’s desk by Christmas.  Speaker Ryan reported this week that they believe they have the votes in the House.  Where tax-reform currently stands in the Senate is somewhat less clear.  What is clear is that passing tax-reform by yearend may be feasible given that Republicans in both chambers need a “win” after failing to pass healthcare reform.

The team at Realized® will work hard to keep you informed as tax-reform legislation moves through Congress. Although it appears that 1031 exchanges and the other tax benefits afforded real estate will continue, now is not a time for investors to be complacent. Tax-reform is going to happen very quickly and unfortunately, will be very opaque to most voters.  Even so, Realized® believes it is in the best interest of real estate investors to do their best to follow this legislation as it moves through the House and Senate during the next month or so.

To read the full legislative text of the Tax Cuts and Jobs Act, click here; or for a summary of the respective sections, click here.

If you have any questions regarding 1031 exchanges or how upcoming tax reform could impact them, please contact Realized® at 877-797-1031 or log onto www.realized1031.com. 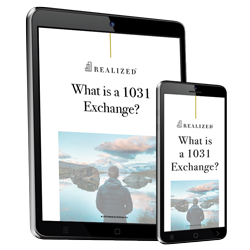