How Will the Inflation Reduction Act Affect Audits? 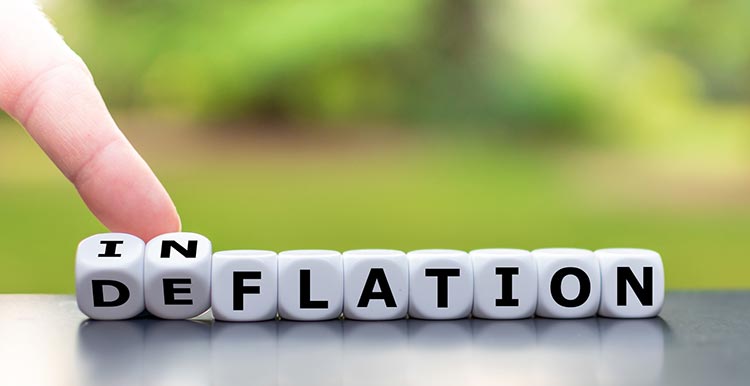 As is often the case with marquee legislation, the Inflation Reduction Act of 2022 has a subject title designed for appeal rather than accuracy. In this case, there is some question about the degree (and direction) of the new law's ability to affect inflation. However, there is no question that it will significantly affect several areas of the U.S. economy. Secondary to the potential impact on inflation, the legislation may increase the ability of the IRS to perform audits. In that scenario, will taxpayers reporting 1031 exchange transactions be targeted? It’s a good question to consider, especially since the tactic has recently been deemed at risk of modification or elimination in past election cycles.

What does the new law propose to do?

First, one of the immediate impacts is the extension of health care subsidies for more than 13 million Americans scheduled for premium increases at the end of 2022. Instead, the lower costs for their Affordable Care Act (ACA) coverage will continue through 2024.

One central provision of the bill allows Medicare to negotiate the price of prescription drugs and creates a $2,000 cap on annual prescription costs for Medicare recipients. However, this doesn't take effect until 2025.

The Act invests over $370 billion in the battle against climate change with tax credits to encourage clean energy technology development, assist consumers with purchasing electric vehicles, and make energy efficiency upgrades to their homes.

How are we paying for all of this?

According to the non-partisan Congressional Joint Committee on Taxation, the 15 percent minimum tax on companies with an annual average profit of $1 billion would raise $220 billion over ten years. More than 55 profitable companies did not pay federal income tax in 2020, as the Institute on Taxation and Economic Policy reported. 1

The stock buyback tax should also generate substantial revenue. In 2021, large companies bought back nearly $882 billion of their stock. Since industry experts doubt that a 1 percent tax will dampen corporate enthusiasm for the practice if other conditions are favorable,2 the amount will most likely be considerable.

Aside from paying the cost of the law’s initiatives, the funding mechanisms are expected to contribute an additional $300 billion toward deficit reduction during the next 10 years.

How will the IRS use the extra money?

The IRS is getting $80 billion (spread over ten years), which sounds like a lot of audit potential. However, just over half, about $46.5 billion, is designated for enforcement. The rest is to improve taxpayer services, improve operations, and modernize the agency’s technology, including the roll-out of a free e-filing system for taxpayers.

Currently, the IRS has 79,000 employees, of which 35,000 are involved with enforcement. Not all enforcement activity means auditing, however. It includes those working in collections, criminal investigations, and legal support.

Will my chances of being audited increase due to the new IRS budget?

The IRS has not been able to prioritize audits, probably because keeping up with processing returns and trying to answer the phone has been challenging enough. In the agency’s defense, the last couple of years have been difficult for the budget-starved organization. They successfully delivered stimulus payments and advance child tax credit payments. These new responsibilities have exacerbated and highlighted their failures in customer service. The IRS can answer less than 10 percent of the calls it receives from taxpayers looking for help.3

So, it isn’t surprising that the audit rates are minuscule for both individuals and corporations. For example, in 2021, the IRS examined approximately 739,000 tax returns out of 261 million received. However, an extra 4.65 million annually for the next 10 years (the enforcement part of the windfall) will pay for quite a few more auditors. In fact, that will almost double the current $5 billion enforcement budget.

If that increased budget doubles the enforcement staff, the process will likely be slow and incremental. Still, it’s possible that the audit rate could eventually increase from below 1 percent to close to 2 percent. However, that doesn’t double everyone’s chance of being audited. The increase is intended to focus on high-end taxpayers, with audit rates increasing faster for individuals and businesses with gross income over $400,000.

Income isn’t the only key to being audited, in any case. Some triggers include:

Will my 1031 exchange raise a red flag with the IRS?

For most investors, an audit is a dreaded event but nothing to really worry about, assuming you’ve been honest. Of course, an error or the particulars of your tax return may trigger an audit, but most such examinations are resolved through correspondence, with few progressing to a field interview. For investors deferring capital gains taxes by completing a 1031 exchange, the good news is that submitting a Form 8824 with the return doesn’t make the list for top audit triggers.

You know there are strict rules governing the exchange, including the timeline, the property type, and the need for equivalent value and debt. Failure to adhere to the IRS protocol will result in disqualification of the exchange, followed by the imposition of a tax levy. Taxpayers use IRS Form 8824 to report an exchange with their tax return for the year in which the transaction is completed. If the 1031 exchange straddles two tax years, you may need an extension for the filing.

The failure points for an exchange are frequently in the identification and completion timeline. The IRS requires that potential replacement properties be formally identified within 45 days of the original property’s sale. These dates are recorded on Form 8824. The execution of the purchase of the replacement property or properties must be completed within 180 days of that original sale (not 180 days after the identification deadline).

The IRS requires investors to use the services of a Qualified Intermediary to manage the transaction. The intermediary can’t be related to or an employee of the taxpayer. You can improve the potential for success if you also have the advice of an exchange expert. Your team at Realized ® can support you with end-to-end investment guidance, enhanced by our unique wealth management platform.

Realized does not provide tax or legal advice. This material is not a substitute for seeking the advice of a qualified professional for your individual situation.Costs associated with a 1031 transaction may impact investor’s returns and may outweigh the tax benefits. An unfavorable tax ruling may cancel deferral of capital gains and result in immediate tax liabilities. 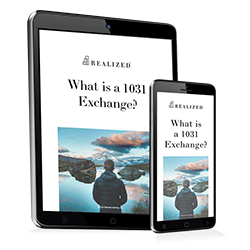 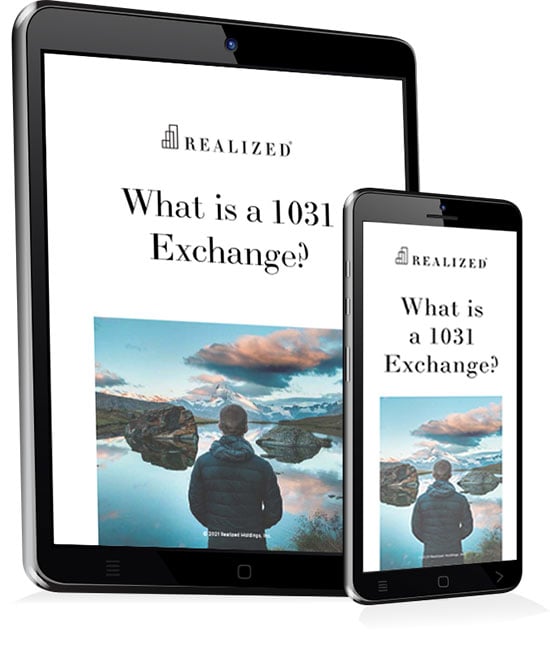